The Truth About Presidential Elections

Politics and investing have always been spoken about in the same breath. Commentators and candidates alike often frame the performance of the stock market as a sort of “barometer” of a president’s policies. But the data don’t support this link. Over the past 120 years, the long-term performance of the market has shown almost no correlation with government policies.

So what’s the real story when it comes to politics and investing?

1. Markets have performed well under both parties

Neither party can lay claim to superior economic or financial market performance. The S&P 500 Index delivered an average annual return of approximately 11% over the past 75 years, through both Democratic and Republican administrations. The US economy also expanded around 3.0% during that period.1

2. Markets don’t care if you don’t approve of the president

From the inauguration of President Kennedy through the current administration of President Trump, some of the best returns in the stock market have come when the president’s approval rating was between 36% and 50% — in other words, when at least half the country disapproved of the job performance of the sitting president.2

Gallup poll presidential approval ratings and the growth of $100,000 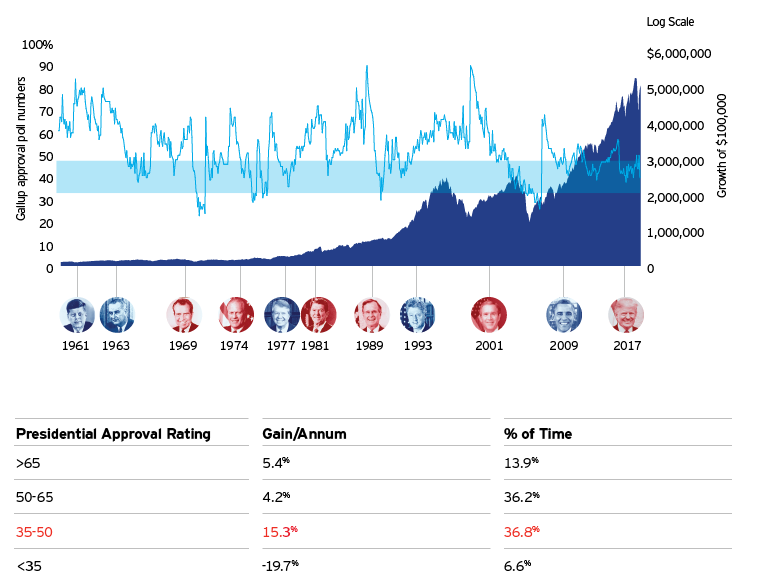 Predictions about the ultimate impact of legislation are often far removed from the actual results. For instance, it was predicted that President Obama’s Patient Protection and Affordable Care Act of 2010 would destroy small-business hiring. But since it was implemented, 8.6 million jobs have been added in this sector.3 Similarly, President Trump’s Tax Cut and Jobs Act of 2017 was intended to unlock capital expenditures, but it has thus far failed to bring an acceleration in business investment as issues such as trade uncertainty and, most recently, Coronavirus have impacted confidence.

Employers with 50 or more full-time employees are considered “large business” and therefore required to offer employee health coverage or pay a penalty.

Section 179 allows taxpayers to deduct the cost of certain property (such as machinery and equipment purchased for use in trade or business) as an expense when property is placed in service.

Learn more about what really matters to markets

These are just some of the essential truths about elections and investing. Click here to see a brochure which clearly and simply illustrates these three, plus seven more:

MY JOB IS TO BE HERE WHEN THINGS ARE BAD!

Representatives are registered through, and securities are sold through Nationwide Planning Associates, Inc., Member FINRA/SIPC, located at 115 West Century Road, Suite 360, Paramus, NJ 07652. Investment advisory services are offered through NPA Asset Management, LLC. Insurance sold through licensed NPA Insurance Agency, Inc. agents. Frank is registered in NJ, NY, PA, FL, CT, CO, NC, OH and RI. He is also licensed for life and health insurance in NJ, NY, FL, OH and RI. The presence of this web site on the Internet shall in no direct or indirect way be construed or interpreted as a solicitation to sell advisory services to residents of any state other than those listed above and shall not be deemed to be a solicitation of advisory clients living in any state other than those listed above. Nationwide Planning Associates, Inc. and Frankly Financial are non-affiliated entities.

Copyright © 2020. Some articles in this newsletter were prepared by Integrated Concepts, a separate, non-affiliated business entity. This newsletter intends to offer factual and up-to-date information on the subjects discussed but should not be regarded as a complete analysis of these subjects. Professional advisers should be consulted before implementing any options presented. No party assumes liability for any loss or damage resulting from errors or omissions or reliance on or use of this material.

When Stocks Drop That’s NOT The Problem

Sometimes, when it comes to investing, volatile markets aren’t your worse enemy. You are.  Unfortunately, our brains often play tricks on us, causing even the savviest of investors to make decisions that don’t really make a lot of sense, such as panic selling or ignoring opportunities.

The problem of psychological investing traps is so pervasive, in fact, that there’s a whole field dedicated to studying it called behavioral finance. Researchers in this discipline look at the way psychology affects how we make financial decisions. Knowing about these traps can help you avoid them and make you a better investor. Here are seven psychological traps to keep in
mind.

Sunk Costs Bias — The sunk costs bias has to do with the all-too common tendency to stick with
something, whether a bad boyfriend or a bad investment, long after it’s clear that it’s not worth it anymore. Still, because you’ve invested a certain
amount of time or money, you’re reluctant to give it up. In investing, you might end up hanging on to a stock long after you should sell it in the vain hope that you’ll eventually come out ahead. But in
these cases, it’s better to cut your losses rather than to hang on to a loser.

Familiarity Bias — Most of us are biased toward what is familiar to us. We head to restaurants we’ve been to before and follow the same roads to work because we know what to expect. With  investing, familiarity bias involves favoring investments that are familiar to you. You might prefer to invest in the company you work for or big-name businesses that are in the news. That
could cause you to overlook important opportunities you don’t know as much about.

Anchoring — Anchoring is the process of getting attached to a particular reference point – such as the price you paid for a stock — and using that to guide future decisions. Or you might fixate on a stock’s previous high, even though that price was an anomaly. Anchoring is why buyers think they got a great deal when buying a car for $50,000 when the initial price was $60,000, even though the car’s really worth $40,000.

Whether buying stocks or cars, anchoring involves using a single piece of information to determine what a stock or other investment
should be worth while also discounting more relevant information, such as a company’s fundamentals or broader economic trends. Unfortunately, avoiding anchoring is difficult,
but considering all available information before choosing an investment can help.

Focusing Too Much on the Recent Past —  Recency bias is the tendency to make decisions or judgments based on relatively new or recent information. For example, during times when the market is up, people may ignore or discount the
possibility of a market decline. Or, if a certain category of stocks has done poorly recently, people may conclude that those stocks always have negative returns, even if the dip is an anomaly. You can avoid this mistake by doing your best to consider the entire universe of information at your fingertips, not just what happened yesterday.

Following the Herd – While following trends might be fine for fashionistas, it’s not always a smart investing move. Yet herd investing

is an all-too-easy trap to fall into. If everyone is telling you that now’s the time to get into a certain hot investment, you may feel you need to act fast so you don’t miss out. But just because something is popular doesn’t make it a good investment. Blindly following the herd without first consulting your own financial goals and plan doesn’t make you a smart investor.

Overconfidence — Most of us like to think we’re smarter than the average person. If you hit it big
with a certain investment, you may over-attribute that success to your skill rather than what it really is — luck. That can cause you to repeat
the same behavior again.

Panic — Investing isn’t for the faint of heart. When the market takes a sudden dip, it’s easy to
panic, which can lead you to make bad decisions, such as selling at a big loss, rather than riding out the natural hills and valleys of investing.
Making these emotionally driven choices costs you a lot of money. When making investing decisions,  make sure they’re based on evidence, not your initial gut reaction to the day’s events.
Avoiding psychological investing traps on your own can be difficult.

Copyright © 2020. Some articles in this newsletter were prepared by Integrated Concepts, a separate, non-affiliated business entity. This newsletter intends to offer factual and up-to-date information on the subjects discussed but should not be regarded as a complete analysis of these subjects. Professional advisers should be consulted before implementing any options presented. No party assumes liability for any loss or damage resulting from errors or omissions or reliance on or use of this material.

A massive amount of automated trading helped cause recent turmoil in the market. 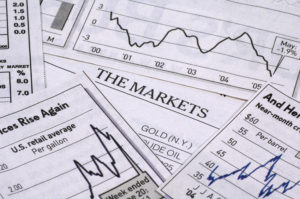 January, typically a strong month because of the long term tendency for pension funds and institutional money to enter the market. This year was no different, as equity funds enjoyed their biggest monthly inflows on record, attracting about $102.6 billion in January.  This caused the stock market to post its best January returns since 1987.

The recent decline was driven by computers trading with other computers on high amounts of leverage. High frequency trading (HFT) routinely surpasses 50% of volume on most stock exchanges, and it may have made up more than 50% of recent volume.  The 1987 market crash was blamed on “portfolio insurance,” a form of computerized trading in which the lower the stock market went, the more the computer programs sold, creating a quick avalanche effect. Some of the recent moves felt like small avalanches.

The Energy Transfer Partners (ETPs) space is over $3 trillion. As that space has grown, so has the use of computerized trading that helps manage ETP securities.  Suffice it to say stock market volatility explosions caused those ETPs to reverse their short VIX futures positions, causing a record surge in VIX futures buy orders after-hours, when such ETPs typically square their positions.

On the day the Dow Jones Industrial Average declined 1,175 points, a surge in VIX futures buy orders created a surge in S&P futures sell orders as they are inversely correlated. Because of the record buying of VIX futures, their prices rose quickly after-hours, which caused many ETPs whose portfolios are short VIX futures to suffer record 80% declines after-hours, in effect blowing up their portfolios.

While most of the assets in short-volatility ETFs have already been liquidated over the week ending Feb. 9, there are still over $3 trillion in assets in all ETPs, so, sorry to say that further downside is still lurking in the stock market. It looks like the regulators allowed a monster to grow in the face of the ETP industry and they will have a very difficult time reining it in.

While this latest avalanche effect may have been triggered by the air pocket of inflows in stocks in February catalyzed by spiking long-term interest rates and imploding short-volatility ETPs, there is likely to be more volatility for the rest of 2018.  The Fed is slated to keep reversing its own “short volatility” position in the bond market by intensifying QT operations, so the roller coaster we experienced in January and February may repeat – more than once.  (Source: MarketWatch, Feb. 14, 2018)

CALL ME for a portfolio review at no charge or obligation.

Average Investor vs the Market

Do you know how the market has behaved over the last 20 years? How have you managed your investments over that time? Do you see any kind of pattern? Does this chart from BlackRock mean anything to you? Bear in mind, it stops at the end of 2016 and the S&P has increased nearly another 20% since then, so it’s even higher than the chart shows! 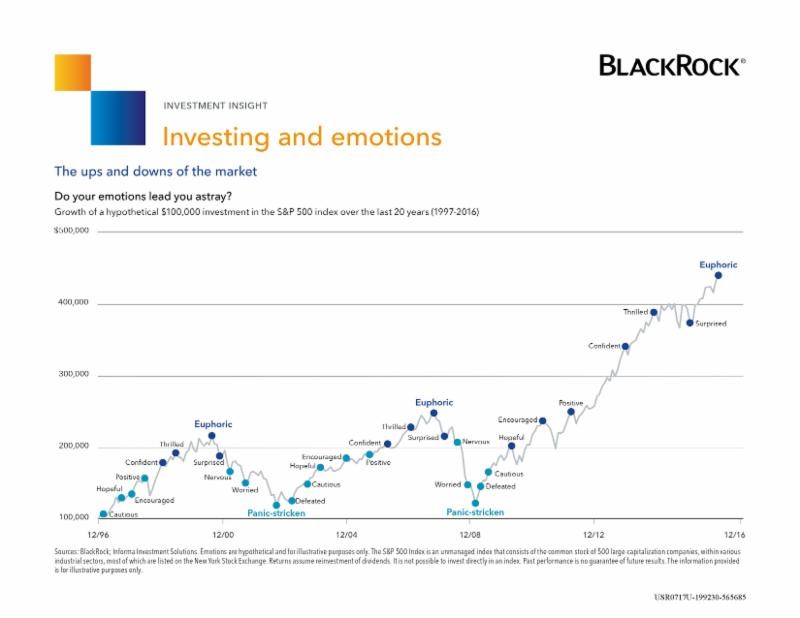 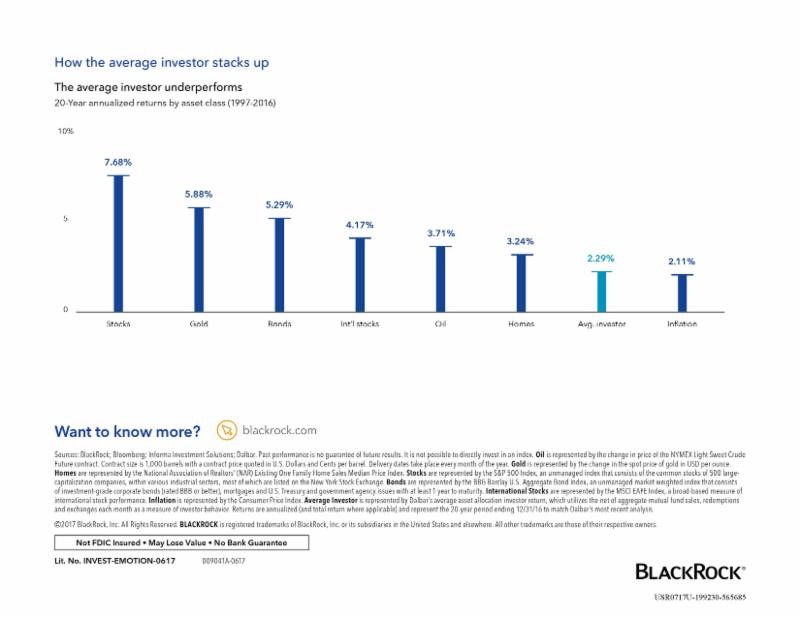 CALL ME for a portfolio review at no charge or obligation.
Just don’t wait too long…

Graph and information provided by BlackRock